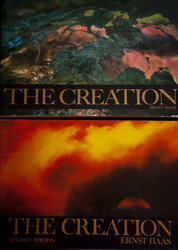 The Creation was first published in 1971; it was a highly successful book, selling more than 250,000 copies. A revised edition was published 12 years later in 1983. These two books, equally stunning, are quite different.

According to Haas’s preface in the revised edition, the original plates that were used for his first book were deemed unusable for the revised edition. Many of his originals had been damaged in laboratories, lost or faded from being overused in making prints.

Most photographers would have had a meltdown knowing that their original work had been destroyed or lost. In the true style, grace and lovable character of Ernst Haas, his reaction: “I was so happy. Finally, I could correct my old mistakes – and no doubt make some new ones – not only in pictures, text, and layout, but also in the whole concept, which began to redo itself. Reseeing becomes rethinking. The Creation needed a re-creation.”

Ernst was a photographic poet. His lyrical interpretation of the world was unique; it was as though he painted with his camera. The images he created were musical in nature – a visual dance of fluid, beautiful movement. His eye for detail magnified beauty in its simplest form. Ernst showed us the world in a way we had never seen before. 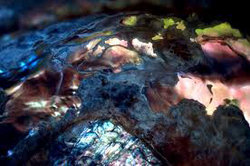 The cover of The Creation is a detailed close-up of an abalone shell taken at sunset; an awe-inspiring photograph that sets the stage for the powerful images that follow. Page after page, his photographs are mesmerizing. The way Haas captured color, light, movement, mood, quiet and explosive nature, the most delicate and intricate details; he displayed an innovative, artistic sensitivity that made him different from everyone else. 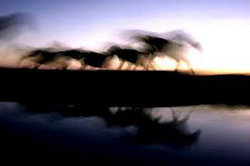 Another signature photograph is of a herd of wild horses galloping in the Nevada desert during the late afternoon -- Haas’s special touch – taken at 1/15th of a second. The movement he captures is magical. This magnificent image is part of my personal collection. Wild Horses, Nevada, Ernst Haas © 1957

For the revised edition, Ernst chose a different photograph for the cover; a fiery, mystical image taken near San Francisco. As Haas describes: “an atmospheric feeling, a disturbing quietude – as if a storm could suddenly arise, or the sun could slip away through the rolling fog”. His “recreation of The Creation” showcases wonderful new images. It becomes apparent that Haas never stopped photographing this project and continued to improve upon the images he published.

At the end of the revised edition, Ernst humbly offers this valuable insight:

“If I have any word of advice to give, it is that a photographer should learn to work with a minimum of equipment. The more you are able to forget your equipment, the more time you have to concentrate on the subject and on the composition. The camera should become an extension of your eye, nothing else.” 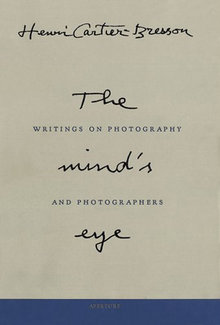 The Mind's Eye by Henri Cartier-Bresson